Well it’s happened again! It was a real thrill a while back when my Quest for Glory IV 3D Hexen mod got featured on Rock Paper Shotgun and then in none other than PC Gamer Magazine US & UK but I was bit sad that Star Trek Doom was largely ignored as I expected that to be the bigger news.

Well now in 2019 finally Star Trek Doom has been featured somewhere haha! A fellow named Richard Scott-Jones has done a really nice and very complimentary article on my mod over at PCGamesN and sure enough it’s led to new viewers visiting my mod pages and videos which is awesome! 🙂 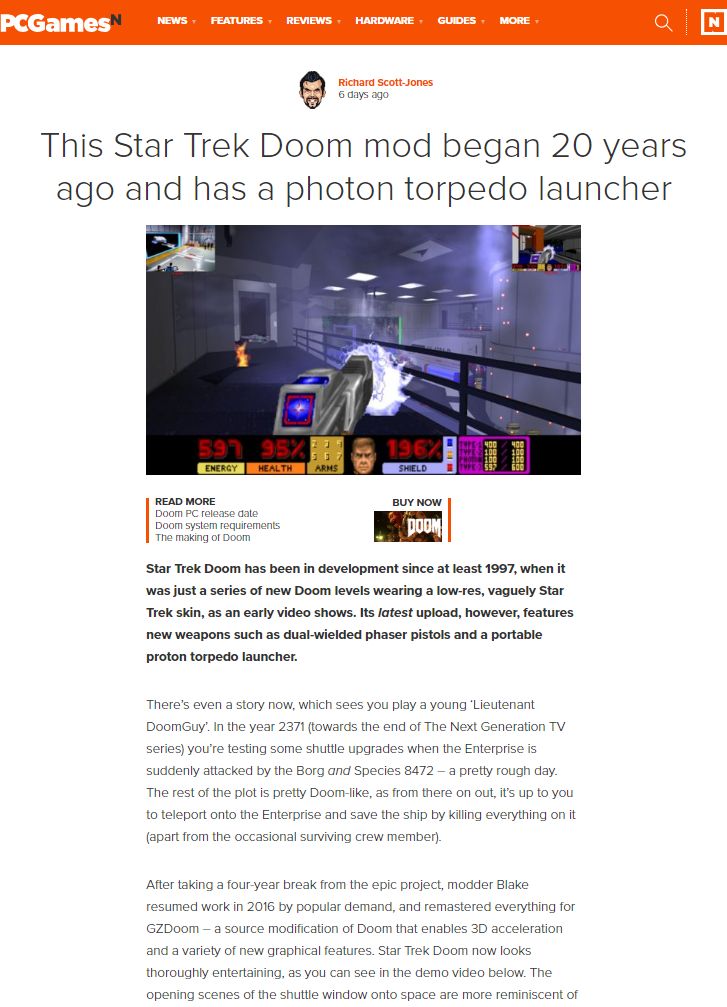 Amazing! After the awesome announcements last year of Marvin’s Starflight 1 remake project and Greg Johnson’s official Starflight 3 sequel in the making you’d think the Starflight universe had nothing left to give yet another Starflight fan game has arrived!

This time it’s Starflight Heroes of Arth, a SEGA Genesis/Mega Drive style total conversion mod for Starflight The Lost Colony created by another talented member of the Starflight Fan Facebook Group, John Weaver. This is very exciting news to me as making a Genesis graphics mod for TLC is something I’ve always wanted to do but lacked the time, talent and patience lol! Thankfully John has those qualities and has already released an early WIP version of his mod to the public. Because this mod was also a dream of mine too I couldn’t resist helping and have been making up some background images for him!

END_OF_DOCUMENT_TOKEN_TO_BE_REPLACED

Retro Gamer magazine is such a great magazine. Every month I get my latest issue imported to Australia from UK and excitedly open it up to see what new tributes and behind the scenes interviews they have on my favourite games growing up.

Well less than a year after they posted the brilliant SIERRA – The Adventure Game Years which contained interviews with multiple Sierra elite about all their big games, Retro Gamer have gone and created yet another big article (in issue 180 April 2018) on Sierra interviewing none other than Ken Williams himself!

Sadly there’s barely any mention of my beloved Quest For Glory series other than Retro Gamer recommending one of them but nevertheless its a great article that offers some interesting insight into what Ken felt about the glory years and the darker years of Sierra. 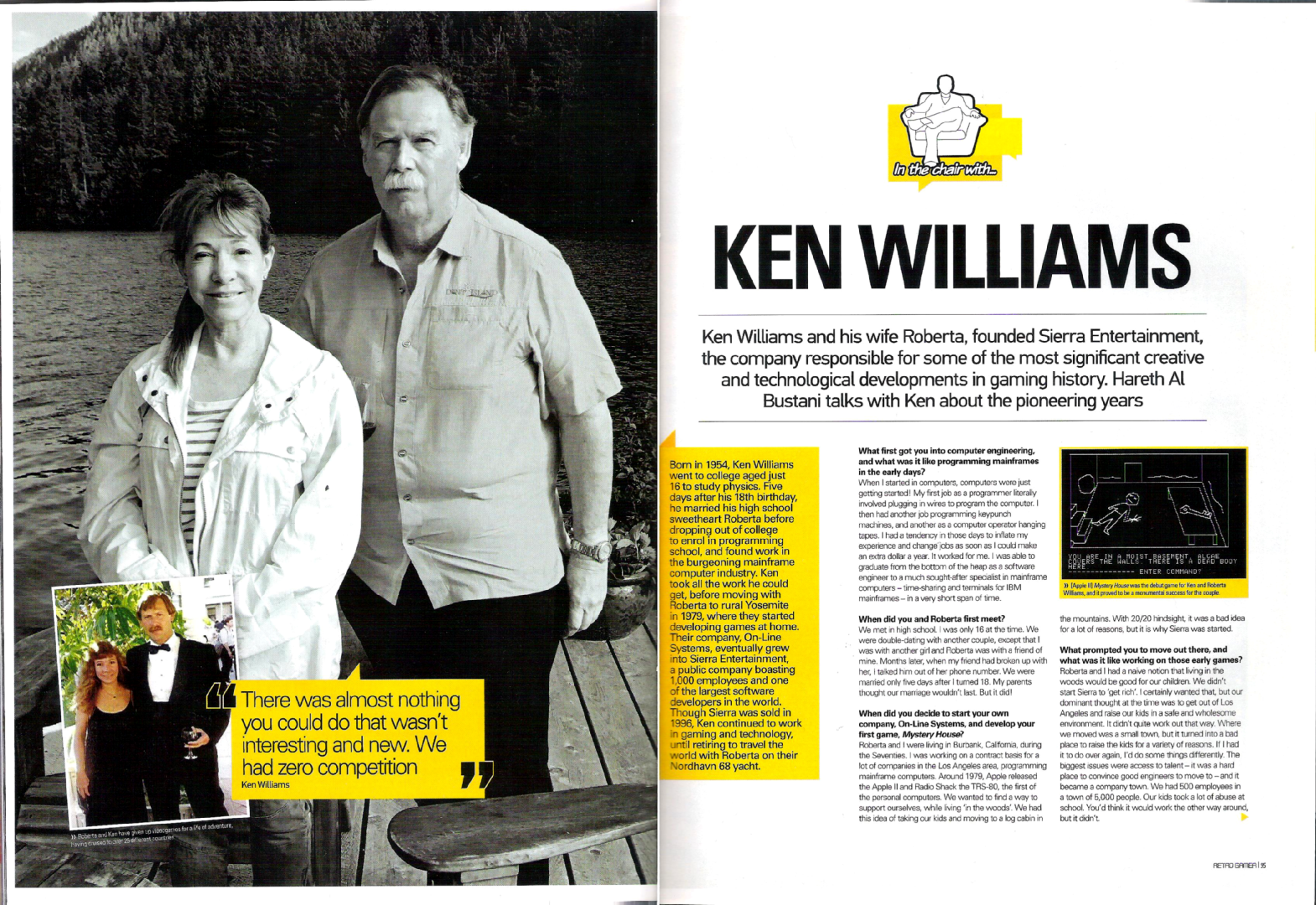 END_OF_DOCUMENT_TOKEN_TO_BE_REPLACED

Hi guys! Work is still ongoing with my big new Civilization section covering not just Civilization but also Colonization and Alpha Centauri. However I do have something cool for any Civ fellow fans dropping by now.

One of the reasons I finally decided to start working on a Civilization series tribute website was because a year ago PC Gamer (Issue 311 – Dec 2017) did an awesome 14 page spread on the history of the Civilization series covering all the games (Incl Civ6) with behind the scenes info and new interviews with Sid Meier, Bryan Reynolds and Jeff Briggs. It really got me thinking about the games again and how much I miss them. I’ve only scanned the first 2 pages as fortunately I found an online copy here:
https://www.pcgamer.com/au/the-complete-history-of-civilization/ 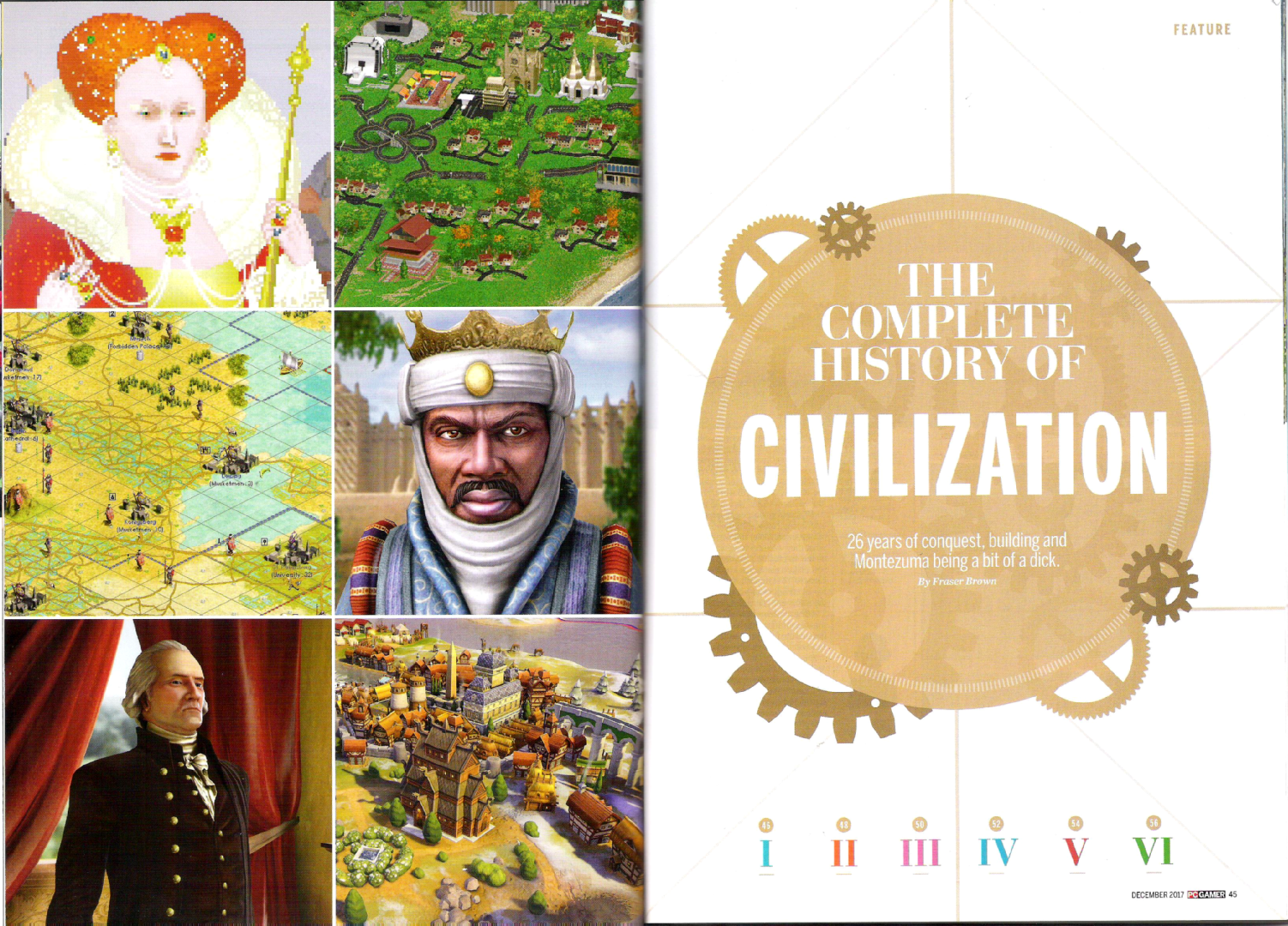 Then just by pure coincidence while cleaning out my spare room I found an old PC Powerplay magazine (Issue 112 – May 2005) with a beautiful visual tribute to classic Civilization 1 and an interview with Bruce Shelley. This article became a big inspiration for how I’d do my website tribute (eg colourful map of the world background). Here’s my scans: 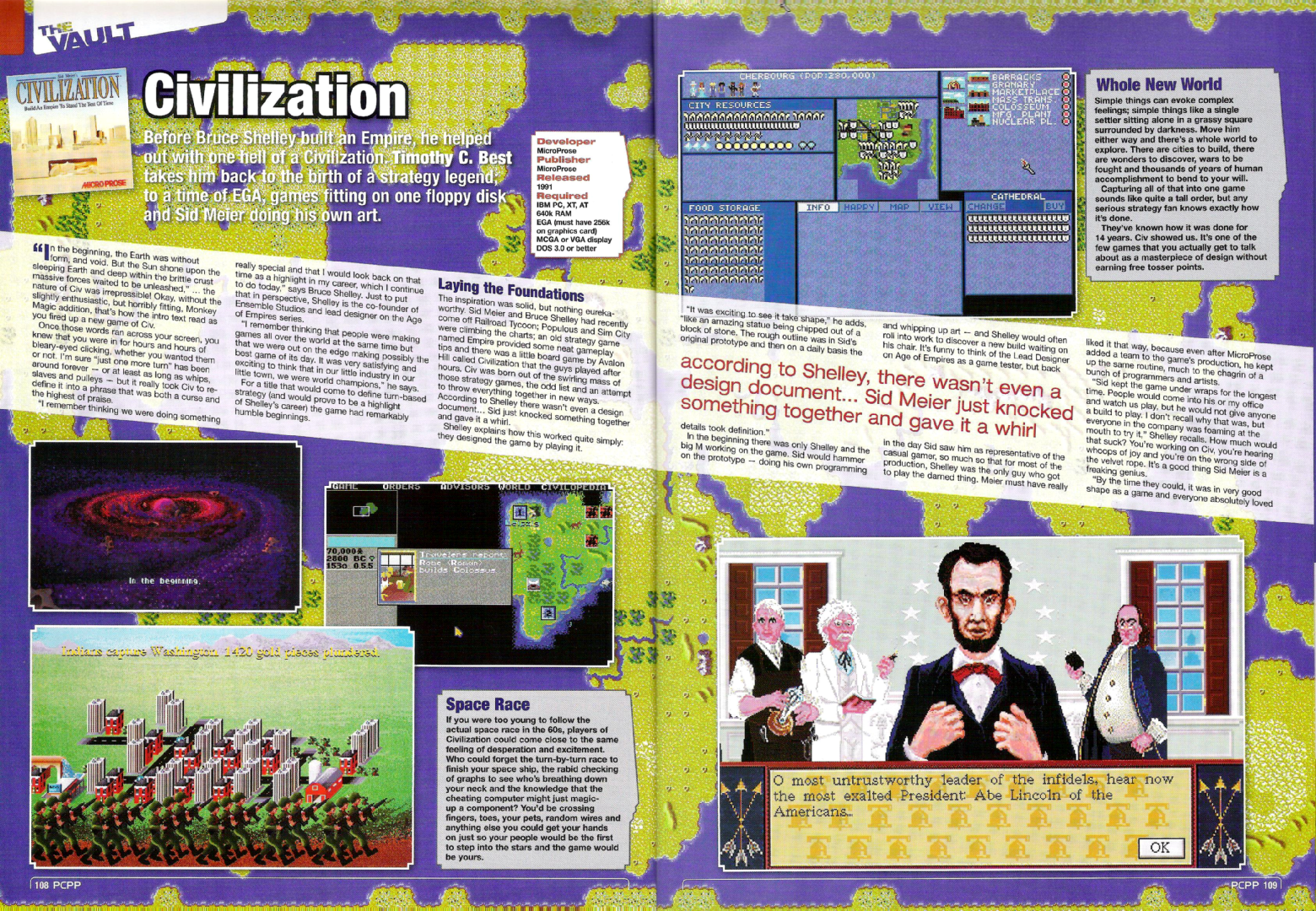 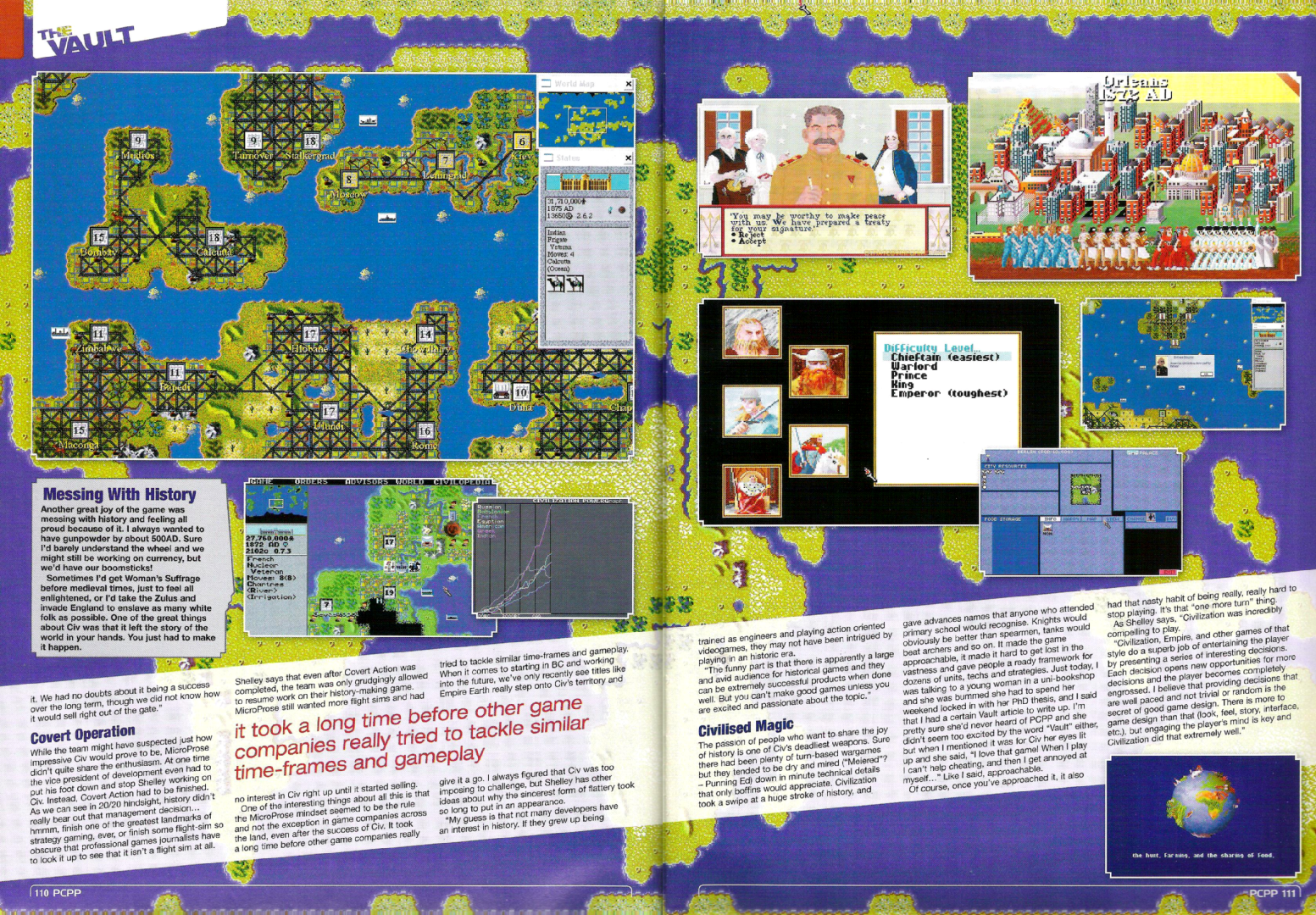 END_OF_DOCUMENT_TOKEN_TO_BE_REPLACED

Yes really haha! I’ve worked for a bit again on BOTH my Star Trek Doom Project (GZDoom Doom 2 mod) and my Quest for Glory IV 3D Project (GZDoom Hexen mod). Loyal fans will know that for some time now my mods have sadly been unplayable due to the discontinuation of ZDoom and the latest versions of GDZoom triggering horrible game ending bugs.

I tried and tried and tried and just couldn’t figure out what was going on and why the newer versions were rejecting my MAPINFOs. I even went to some of the big ZDoom community veterans behind some of the best mods out there for help and even they couldn’t see what was wrong. I gave up, told every fan to stick with an old version of ZDoom/GZDoom and just didn’t wanna touch the project again such was my frustration with what happened.

But then just for the hell of it I decided to take the risk of reporting my issue as a bug to the GZDoom. I was worried they’d tear me a new one for suggesting that their program was the program and not my cr*ppy scripting but thankfully they were good to me and saw the problem right away!! I followed their advice and sure enough everything started working again!! 🙂

So as a result I’ve re-released both mods and updated their documentation. If you’ve recently download my mod fear not, I’m just running late with announcing this and I actually updated my downloads a while back so your version ‘should’ be all good. But if in doubt, go and download again. 🙂

Pics, videos and updated downloads at: