The site upgrade continues! This time I’ve worked on my Heroes of Might & Magic section adding many more games similar to HoMM in gameplay style. I’ve now also done full tribute pages to Heroes Chronicles and the rare HoMM 1 & 2 for Nintendo Game Boy games. And I’ve stuck in some custom HoMM mouse cursors as for some reason I’d forgotten to ever do them in this section. 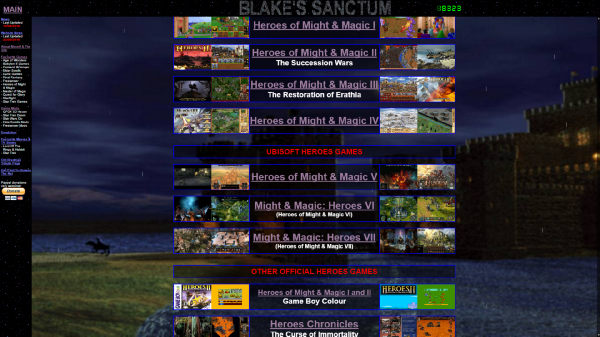 Decided to add some fun stuff to the under construction Emulation/Console section of my site. I’m sure most of you were either a Sega or a Nintendo kid growing up.. or both lol.. I was SEGA boy and loved my Sonic, Wonderboy and Bubsy etc but I loved going around to mates houses to play Mario, Faxanadu and Star Fox etc. Well a few years ago I found an old video tape I made as a kid where I recorded heaps of old Nintendo and SEGA adverts, I converted it to dvd and have now decided to stick it on youtube for all to enjoy.

While setting up my Lord Of The Rings video pages I got to re-experience just how awesome Peter Jackson’s trailers were back in the day and the music they used. Here’s 2 songs he used that just blow you away.

Have made some changes to my forever work in progress Lord Of The Rings section. The never used ‘miscellaneous pictures’ sections for all 3 film pages have been changed to video pages where I’ve created some slideshows of the various awesome moments in the 3 films and also posted all their teasers and trailers. Was great watching them all again!

END_OF_DOCUMENT_TOKEN_TO_BE_REPLACED

Hey everyone! With the blog page finished I’m now moving on to updating all existing sections with new content. I’ve started with my Star Trek Section adding a new videos page where I’ll post rare and interesting Star Trek documentaries and cool trailers.

The first to go in the page is my own video. This is a rare Star Trek Generations making of special that was released on VHS by K-mart Australia that most people around the world have not seen before. I dug out the old video tape and converted it to digital format and put it online in 2 parts for all to enjoy!

I have decided to post all future news on this blog page. I got tired of editing & uploading html files every time I wanted to post news lol! From now on I can now post better pictures & videos, use tags & categories so you guys can look up your favourite topics, and you guys will be able to comment, vote & help out on my news posts too! 🙂

Yup, it’s time for another BIG SITE UPDATE, every single page on the site has been changed. However you can’t really see it haha! ;P Basically I fixed some problems that have plagued the site for a long time. The first was the fact that you may have noticed most of the pages had weird question mark boxes all through the text. I’m guessing all the browsers dropped support for special characters so all my ‘”,- and bullet points originating from word (where I typed up most of my webpage text) triggered the errors. I’ve converted all the characters on every page to their simple text/html versions (the only one I couldn’t fix was the little copyright symbol). The other big thing I changed on every page was switching from html Frames to Java Frames. It wasn’t easy & it took days for me to get it working as I don’t know java but this allows me to do clever linking to pages on the site & also force load the top frame & left side menu no matter how or where someone enters my site. Over the years I’ve seen people posting links to pages from my site in forums & facebook etc using internal pages without the index frames meaning anyone who used that link couldn’t navigate my site properly. That won’t happen any more! I’ve got some big things coming, a new news page, my annual tradition of 3 big new sections coming, & updated content for every single other section, so stay tuned! 🙂

DRUM ROLL!! Might & Magic Heroes 7 (Or Heroes of Might & Magic for the oldschool fans) has been announced!!! After Heroes 6 failed to excite fans and make a lot of money I was worried the series was dead again however Ubisoft’s giving it another go. I’m filled with excitement again as this time it’s being made by Limbic Entertainment who are responsible for fixing Heroes 6’s bugs (after Black Hole Entertainment died), and cool DLC map packs set in the original M&M universe (Enroth, Varn & Xeen), and successfully bringing back from the dead the classic Might & Magic series with Might & Magic X – Legacy, so it should be in good hands as these guys really care about the oldschool M&M content & gameplay. The Screenshots in this Joystiq article and especially the IGN Gameplay demo video showing off the game using the Unreal 3 Engine looks amazing. I love it in the catapult battle how titans were walking around in the background destroying buildings, adds to the tension and excitement of the battle. The map ‘events’ were awesome too eg titans destroying buildings, catapults destroying titans, snow falling, avalanches, draining lakes, blasting forcefields etc.. & the castle battle at the end wow! Ubisoft have created a New MMH7 Website where you can vote on which races will be in the game (hopefully the ones that don’t make it will come in addon packs like in the old days), so get over there and vote! 🙂

Hey everyone! I haven’t posted any news this year as I’ve been busy with gaming and real world stuff. Don’t worry though as every year I like to add around 3 big new sections to the site and over the next few months I’ll be getting stuck into them! For those with a keen eye I’ve already snuck in a preliminary page for one of the three. Outside of my site there’s been some big news lately so here it is!

Sierra is back! Activision have brought them back from the dead to work on old Sierra IP with indie developers. Yes this could mean more Quest for Glory, Space Quest, Police Quest, and Leisure Suit Larry games. They’ve already announced a new King’s Quest game! Here’s the official announcement, New Sierra Director Interview, and Teaser Trailer below. Exciting times!

And finally for my Starflight Series Section I decided to create a slideshow video of all the old rare Starflight 3 Fan Project material that is no longer publicly available. I wonder if they’ll ever finish this game..