It’s been a long time since I last announced a new section for my website (Dec 2014 in fact!) as my health hasn’t been too good and what little energy I’ve had over the last year and half I’ve devoted to my Doom Engine projects which I’ll be releasing soon. However now it’s time to announce the release of a big new section that’s been a very long time coming, my Blake’s Sanctum – Star Trek Games page! 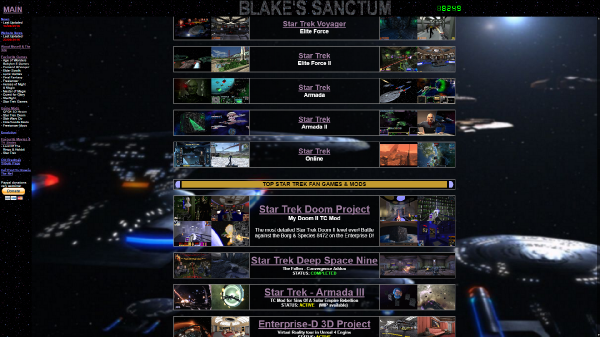 This new section tributes all my favourite Star Trek games that I’ve either played or plan to play. For some of the classic adventure Trek games that I grew up playing I have done massive muti page tributes breaking down all the missions with maps, pictures, hints & tips.

As usual I’ve also done a massive tribute to many awesome fan games & mods relating to Star Trek. There’s a gazillion Star Trek fan projects out there so I’m probably only scratching the surface of them all at the moment, yet already this new section rivals some of my biggest sections of the site (QFG, Dune & MoM) for content. In fact considering that multiple games in the list have huge multi page mission breakdowns this probably is the biggest section now!

Based on feedback from fans I’ve also looked at improving site navigation. This new section uses a simple contents list at the top with bookmark links. I’ve also changed all the back buttons to take you back to the section you were just in (eg hitting back on an official ST game page takes you back to the official list while backing out of a fan game page takes back to the fan game area). So now users won’t have to scroll through my massive lists to get back to where they were lol!

Now I’m going to apply these nav upgrades to the rest of the site and also add a little bit of new content to each section based on new fan games/mods people have contacted me about over the last year or 2. Then I plan to do a big upgrade of my youtube channel to employ ‘End Referral Cards’ and record some new videos for the channel. Then I will release my 2 big doom engine projects to the world! Then I’m taking a big break to play games, I haven’t played games properly in nearly 2 years and it’s really bugging me lol! Being creative and doing your own mod projects is fun but its very draining (so now I personally understand why so many fail), I miss just sitting back and letting a game take me on an adventure.

Anyway I hope you all enjoy this new section! Worked my ass off on it lol! 🙂