Hi guys! We’ve passed 27,000 visitors at Blake’s Sanctum and are already half way there to 28,000! That’s nearly 10,000 up since this time last year which is just amazing! Thank you everyone for your support and kind messages. 🙂 Helps drown out the few who feel the need to tell me how much they hate my work.

Anyway it’s that time of the year again when I add a brand new section to Blake’s Sanctum. To celebrate Imperium Galactica’s 2017 resurrection on Steam & GoG I thought I’d finally do what I’ve been planning for years and create an Imperium Galactica Legacy section paying tribute to the original IG games along with any successful & sadly unsuccessful IG related fan projects out there to make sure that they are never forgotten and can inspire talented IG fans to create new IG projects in the future. I also created a list of other games out there that are similar to IG as while there’s nothing out there quite like IG there are still some pretty brilliant similar 4X games out there with in-depth planetary development. For this list I collected pics, vids, demos, and information for as many of the projects as possible. 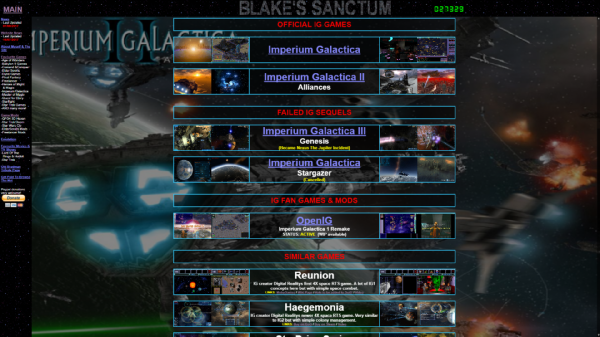 Videos:
I’ve also created some videos as thanks to THQ Nordic upgrading IG2 and the awesome guys behind OpenIG you can now play the whole series in high resolutions looking better than they ever did back in the day.

I waffled on more than planned haha but I just love these games. 🙂 Hopefully they bring more new and returning fans to the series.

If you know of a game series I’ve missed that’s very similar to IG, a fan game based on IG, or a large scale mod project related to IG please let me know! 🙂