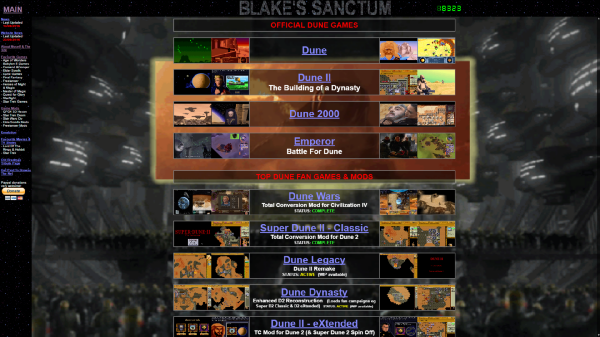 I’ve been busily working on some fun new video content for my big Dune Games section. I have installed the latest versions of all the big Dune 2 fan remakes and created videos giving a brief tour of their features and then (badly lol) played a skirmish match in each to put them through their paces.

OpenRA Dune 2 Classic Mod
Probably the most recent and rarely seen Dune 2 remake. OpenRA (a C&C and Red Alert engine rebuild) is extremely popular but because this mod only works with the Github development version of OpenRA it’s half impossible to get working. With some help from the devs my friends & I finally got it working. However our multiplayer match was over way too quickly so I decided to do a longer skirmish game to check out end game buildings & units too.

Dune 2 Legacy
By far the greatest Dune 2 remake of them all. Great graphical options, 3 sub houses (Fremen, Sardukar, Mercs), a map editor and loads of skirmish/multiplayer maps. They’ve added the Super Dune 2 Missions with new improved briefings so really the only feature still missing is support for Dune eXtended missions.

Dune 2 Dynasty
A very good Dune 2 reconstruction similar to Legacy but it has been neglected for years now and is lacking some of Legacy’s features. However it DOES support Dune eXtended missions making it currently the only choice if you wish to play eXtended missions in HD with C&C controls. Plus being an accurate reconstruction of the original Dune 2 it does give a more classic Dune 2 like experience than Legacy. My skirmish match went longer than planned so the video is in 2 parts.

Dune 2 The Maker
No video from me but The Maker gets an honourable mention as to this day its enhanced, upscaled and sharpened Dune 2 graphics still beat all other projects. Unfortunately it doesn’t support high resolutions and was abandoned in 2013. HOWEVER it’s creator Stefan has returned in late 2016 and rebooted the project with a new java based engine. It’s still early days so I’ll hold off on doing a video for now. In the meantime here’s a very old video Stefan made. 🙂